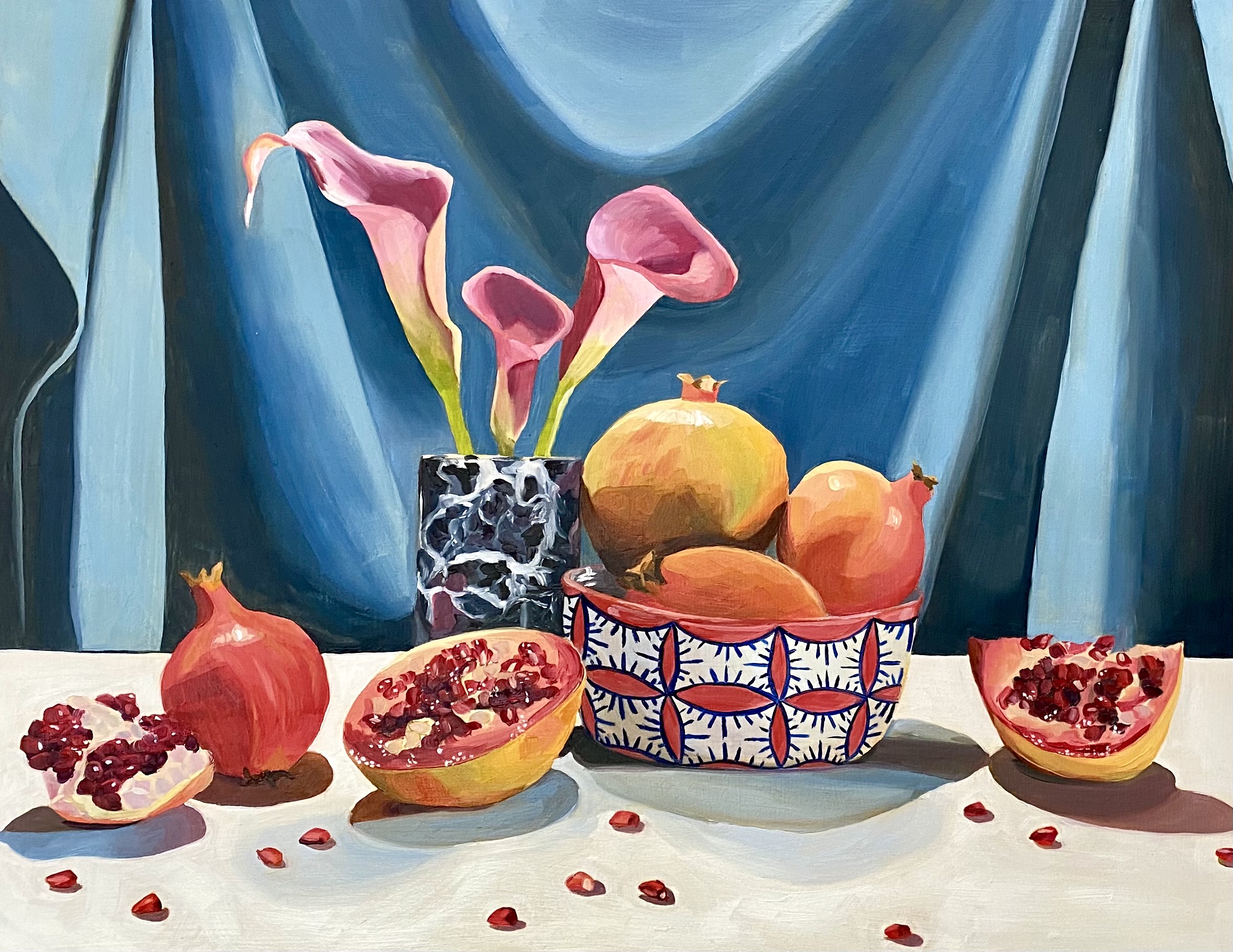 When Helen struck Hector down in her private chambers, she felt her heart lift out of her chest in a way it hadn’t since Paris had lifted her out of her window, back in Sparta, back when she was a child.

When Helen wrapped her fingers around the hilt of the kopis knife she had forced into Hector’s neck, when she yanked and watched the blood pulse out of him, Helen pictured the first night of the siege, watching Spartans destroy Trojans over a child’s decision to climb out a window.

As Hector gripped the hem of her dress, spitting blood with curses as life abandoned him, as his head finally fell back and his eyes turned glassy and white, Helen could think only of the way Hector had leered at her in life, of the way all men let their hunger burn bright in their eyes.

Helen undressed Hector slowly, tenderly knelt over him in prayer. She cleansed the leather and armor and placed the items on her bed, laid out like the shell of a body. Staring down at the leather pieces, Helen became uncontained ocean foam. She stripped out of her fine Trojan silks and knelt down beside Hector, painted her face, her shoulders, her breasts in blood until she mirrored the red chiton Paris had dressed her in for their wedding. Hector lay as nude as Paris had come down the aisle.

Helen couldn’t help but laugh, and when she couldn’t stop she had to force her fist in her mouth. A wedding, of sorts. Helen’s last wedding had caused every man in Troy and Greece to volunteer their lives. This time Helen would offer her own.

Few knew of the prophecy that inspired Helen’s act of murder. Helen’s husband, Paris, was one of them. Paris’s second-in-command, Hector, was another. From the other side, unkillable Achilles. Most likely Menelaus, Helen’s jealous first husband who led the Spartan charge. Achilles was sure to have told Patroclus, his own second-in-command, close as brothers since childhood. And Helen knew, because Paris had a way of moaning all of his most clandestine knowledge into the crevice of her ear when he pushed into her on the nights he returned from siege.

It was rumored among the foot soldiers that Achilles could not die. He was a beast on the battlefield. Unstoppable thanks to the protection of his goddess-mother. But only while Hector lived. Unkillable Achilles, immortal so long as Hector breathed.

The moment Hector’s eyes turned to gossamer, Achilles was breathing borrowed air, though it would taste as fresh as ever when the black plume of Hector’s helmet appeared on the battlefield.

Helen would force the breath out of Achilles. Permanently.

Helen lifted Hector’s breastplate as if it were a baby, shifted it around and strapped it to her chest. She went through each piece methodically, giving herself form once more. Hector was a short, sinewy man; his armor fit poorly, but it fit. Helen slid her hand under the loose pieces and imagined the ease with which an arrow could pierce her. She would kill Achilles, and then she would die herself. She wondered if somewhere in the shadows of her mind, as Paris had kissed her sweetly and pulled her out the window, if she had known it would always end this way.

Could Helen be considered guilty? It was in Helen’s name that soldiers on both sides volunteered their lives. Or was it Paris’s fault? He had confessed while conquering her that had she fought him, he would have dragged her from the window, from her husband, from Greece. Could Helen force the blame on Achilles, that half god who had killed more men than any other soldier, ever? Who was guilty? Who felt the guilt?

Certainly not Hector. Helen dragged him, wedding regalia and all, into her closet and pulled the curtains around him. She stood on the opposite side of the barrier, donned in Hector’s ill-fitting armor, and listened to the memory of Hector’s dying body hitting the floor with a hollow thud. She imagined how it would sound when Achilles fell.

Helen had defeated Hector. And now, she would kill Achilles.

The battlefield let out a great roar that drowned out Helen’s own heartbeat. The noise of it seemed to carry her through the fight, ducking and jumping and slicing and stabbing. Helen had watched the fighting for 10 years, and Paris had panted strategy and battlefield strategies into her ear since the beginning of it all. But seeing and hearing held a different weight than dodging attacks on the front.

Achilles rode through the crowd on a golden chariot, throwing spear after spear from above. For a half-god, Helen had to be disappointed. Fewer than half of his spears hit their mark. From his chariot, there was open air all around him. He believed himself to be invincible, but he could be struck down from any angle.

Helen felt Nike, goddess of victory in battle, offer her hand. She saw the path ahead of her. Helen took a running start and launched herself forward, pushing off a bent knee, a shoulder, a shield lifted overhead, sending her shooting up and over Achilles’ chariot, javelin raised above her head and ready to strike.

Achilles’ head bent back and up at her. When their eyes met, Helen understood. The battlefield didn’t offer victory, only reflection. Kings killing kings, husbands killing husbands, and now—imposters killing imposters.

The dark haired young man clinging for life to Achilles’ chariot, dressed in Achilles’ armor, throwing Achilles’ spears—this was not Achilles. Helen was not Hector. Maybe they were all guilty.

He seemed to see that guilt in her—they recognized themselves in each other. Mostly, Helen recognized the flash in his eyes: regretful, disappointed. Eager.

Helen hurtled the spear towards him, caught the flash of relief, the gratitude in how he turned his impaled chest up to the sky, and then Helen fell to the ground.

The earth erupted around her; Helen somersaulted painfully over her own shoulders to release momentum. She rolled onto her back and found herself pinned by adrenaline, lying on her back in dirt made wet by blood.

Above her, Trojans and Spartans alike ran towards the chariot, all feverish to verify the death of Achilles. An armored foot briefly crushed into Helen’s chest on its way; she rolled onto her knees and vomited up nekrós, nekrótita, nekrokefalí. Death, death, death.

Helen forced herself up, wiping her mouth as she stood. Her heart was pounding with such severity she worried the force of it might knock her back to the ground. Soldiers were flocking to the chariot, ants swarming a hill where their queen was attacked. Helen pushed against the tide, bruising and battering herself against the waves of soldiers.

There was a brutal roar from behind her, and Helen didn’t have to turn to know the real Achilles had discovered the dead imposter in his armor. She clapped her hand to her mouth and ducked her head. She had to get off the battlefield.

Achilles’ spear struck Helen through the chest. It raised her into the air and tossed her backwards like a pinned rabbit. The iron point passed through her chest cavity and ripped the air from her lungs. Helen fell until her toes touched the ground. She clung to the wooden handle to avoid slipping down another inch.

Achilles came towards her like a bull, breathing as heavy and stomping harder. There were no witnesses on the mountaintop. Achilles had demanded Hector meet him at the peak, and as he came towards her Helen understood why. There were no witnesses to stop his cruelty. Achilles tossed out his hand and plucked the spear like a harp. The flexible wood shook through Helen and wrenched a wail from her insides. Achilles undid the strap under Helen’s chin and Hector’s helmet fell to earth. Deposition.

Achilles reached out and touched Helen’s face. A crusted flake of Hector’s blood peeled off her forehead under two of Achilles’ fingers.

“You’re not Hector,” he mused.

Helen bit down on the beginning of a laugh. “No.”

Every movement sent the spear vibrating through her. She thought of Paris’s boyish face, of his then-slender arms lifting her out of the window. Maybe they were all innocent. “Helen of Troy.”

He stood over her, head blocking out the harsh light of the sun. His hair was golden, glistening, yet the shadows cast revealed bruises, red eyes, ache. “Hector is dead?”

“You’re dead too. Anyone can kill you now.”

Achilles considered this; dismissed it with a nod. “Did you kill him?” he asked.

“With a kopis.” The kopis was meant for ritual slaughter. It had met its intended use.

“Patroclus.” Achilles tongue paused in his mouth. “He died in my chariot, in my armor. Did you kill him, or was that Hector?”

The man in the chariot. Patroclus. Between the two of them, Helen thought she could see his face reflected in Achilles. When she’d held that javelin up, he had begged for it. Yet still she burned at the thought of him. “I did.”

Achilles stifled a laugh with the back of his hand, it sounded bizarrely like a sob. “Your death changes nothing,” he told her. Helen thought his tone was almost gentle. “The Greeks are after Paris for his dishonor. The war will continue.”

So the war didn’t rest solely on Helen’s shoulders after all. The realization came as a strange relief, and the adrenaline drained out of Helen’s body, cut loose by Achilles’ spear. It was getting harder for Helen to keep her eyes open. Somehow, the warmth of the sun felt frigid on her skin. Her grip was weakening around the spear handle. She slipped and cried out as she fell deeper into the pike.

“Let me die as Hector,” she said, speaking quickly, knowing she didn’t have much time. “Cut my face, my hands. Let Hector die here. Not Helen of Troy.”

Achilles pulled his short xiphos sword from the sheath and leveled the blade with her neck, then raised his final weapon up to the sky. Helen watched the golden glint of the blade. She thought, uselessly, of Paris smiling as he came nude down the walkway to marry her.

“Yes,” Helen promised, and as she drew her last breath the god of time, Chronos, offered her a glimpse into the future. She saw Achilles, struck through the heart by Paris’s arrow. She saw Paris, pierced with four arrows, the last of which traveled through his right eye and out the back of his skull. She saw Menelaus, her first husband whom Paris had stolen her from, fire each of the killing bolts. Around her, there was only death. She was relieved. It is those left behind who suffer the most.

Helen died with Paris’s name on her lips and Achilles’ spear through her chest. She did not feel regret.

Patroclus welcomed her with open arms. She walked toward him, one careful step at a time. Below the narrow pathway, lost souls rumbled like an ocean storm at night. Black mist splashed her bare feet. Hector’s pained face surfaced. His eyes recognized her; he bared his teeth before slipping under the other hungry spirits with half-dissolved faces.

Helen reached the end of the aisle wearing her red chiton. Patroclus pressed his palm against hers. She settled her head on his shoulder.

Helen clung to the chiton she had been married in. Paris would be glad to see her in it when he arrived.

LIZZIE FRANK is a writer originally from a farm who now lives in a place that is decidedly not a farm. Lizzie loves arts & crafts and will collage on any available surface. Lizzie loves stories with characters you want to have over for dinner and then fight in the alley later. Find more of Lizzie’s work in Bear Creek Gazette and Final Girl Bulletin Board.