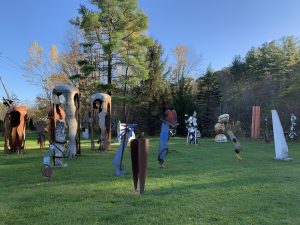 Sarah Sgro is the author of the full-length collection If The Future Is A Fetish (YesYes Books 2019) and the chapbook Without Them I Am Still A Mother (Letter [r] Press 2017). Sgro earned her MFA in Poetry from the University of Mississippi and is pursuing her Ph.D. in English at SUNY Buffalo, where she studies waste in relation to gender and futurity. Her work appears in BOAAT, Anomaly, Cosmonauts Avenue, DREGINALD, The Offing, and other journals.

Helene Achanzar is a senior editor of Yalobusha Review.


HA: Congratulations on your first book! To begin, If the Future is a Fetish starts with a list of things the book’s singular speaker accepts into, holds within, and rejects from the body. What is it about the body’s thresholds that captivates you?

SS: The opening excerpt frames the body’s thresholds as an ever-shifting matter of agency. I’m obsessed with the extent to which we can control what enters, exits, and remains within the body, its memory. The first list, which explores the “things I don’t allow inside,” portrays the body at its most agentic, flexing its power to reject what tries to trespass: no nitrates, no one who misspells my name. Still, fear and sensitivity live within ostensible authority — do I stop my right hand from slipping in because I don’t want to touch myself, or because I’m afraid to? To say that I “allow” things to remain inside is also fraught: to what extent can I discipline the flow of juices, humors, blood and bile? Maybe I let former lovers stay because I know they’ll never disappear. These paradoxes feel consistent with the book’s larger fluctuations between artifice and vulnerability, both of which are always intertwined. There’s so much I wish to banish, that I claim to have banished, which continues to churn.

HA: The book’s larger fluctuations also concern children in the collection. In this book you are pregnant with prescription drugs, pregnant with salted nuts. You want a child born from the moon and from your mouth, yet you eat a child as a light snack. You declare, “I want to have my child & eat her too.” Some of these ideas are oppositional upon first read but the connections between these conditions feel taut. How would you describe the relationship among them?

SS: My interest in corporeal agency also extends to the processes of pregnancy and being birthed. Your body is filled with someone, or you spill from someone else’s body, with differing degrees of control. Relatedly, I’m always thinking about Julia Kristeva’s approach to birth as an abject “revolt of being” which threatens the binary between self and other–how the child is both part of you and matter that is terrifying in its newness, exposing how the body spills.

I find myself continually writing against a stable self, in this collection and more recent work; the speaker becomes her memory and its contents, pregnant with her trauma and the names of former lovers. In some ways, birthing a physical child represents an antidote to unwanted impregnation. It’s a choice which crafts a future that can promise to repair the past. Simultaneously, as I hope the collection suggests, this is an impossible expectation–first, because time isn’t so conveniently linear, and second, because the child is not a voiceless clone. The speaker’s relationship to pregnancy slips in the same way that the self slips, continually encountering unstable paradoxes. There are many contradictory desires which seem to promise safety in their own way: to ingest, to expel, to nourish, to refuse.

HA: One of the ways I see the rejection of a stable self in these poems is through the recurring characters, which are really just initials, and which might really just be extensions of a singular speaker. These initials (J, A, M, X) stand in for the names of former lovers, but to a certain extent, they act as projections of a self. For example, “J’s body is no copy of my body” and “A’s other woman wears my menstrual coat.” That these characters are so loosely formed, having little that tethers them to a world beyond the speaker, feels meaningful. Can you expand on this idea?

SS: I’m interested in your reading of these letters as being tethered to the speaker’s world alone. Initially, I worry about what that does to their independence as potential characters in the collection (however amorphous), but you’re right that unstable identity applies to J, A, M, and X as individual and collective constructs. When writing these poems, I had loose past lover personalities associated with each letter — J: the high school boyfriend. A: the current partner. M: the one night stand (perhaps most fluid in its representation). X: the speaker’s first queer love and lover. But, as categories do, these designations certainly fail and fluctuate throughout, both intentionally and unintentionally. To some extent, they are doomed modes of organizing the mess of the past, which re-muddles itself with each re-telling. I never thought of them as physical extensions of the speaker, but that seems like a generative description of how memory manifests.

HA: The final poem ends the collection sharing the same concern as the book’s title: the conditional if. What should readers take away about the concept of possibility? What, if anything, can these poems tell us about the future?

SS: I think of this collection as living in a conditional tense without resolution, a map of ifs that rarely lead to thens. In some ways, this approach entails a rejection of causality and even teleology. To stay in the “if” and resist the “then” is to always introduce possibility and to never quite arrive. I’m drawn to this highly queer mode of time, which is deeply indebted to Jose Esteban Munoz’s Cruising Utopia. Queerness thrives as an “if”, a not-yet-thereness which stretches beyond a fraught present (and collectively traumatic past).

When I think of the future as a fetish, I think of the future’s carnal allure as potentially utopian corrective. Possibility is a kink! Simultaneously, I think of fetishes as talismans or objects of worship; the future, which can never quite be grasped, is a somewhat inanimate construct onto which we project dreams, fears, desires. And amidst this all, the future is subversively animate in its own right; it offers so much, but promises nothing.

In many ways, the speaker concludes the collection by clinging to a reparative vision of the future (“I will reassemble…if they leave, I let them”). For anyone who has experienced trauma, this faith is essential for survival. But within this conviction lies a knowing rejection of any certain “then.” Whatever this book says about the future, I think, relies on an anti-logic of “if” which urgently embraces the future’s potential while resisting the finality of closure.